Earlier this year, Jim Nunn was faced with a sediment control issue on the yard of the City of Tacoma Environmental Services Solid Waste facility. Sediment control around the facility was something he’d easily handled before with hay bales in swales along the landfill roads. In the Fall of 2014, they built a new parking lot and had a Filterra biofiltration system installed for sediment control.

It did not take very long to find out that the facility had more sediment than their biofiltration system could handle. During frequent rains, there were large amounts of sediment and debris being washed into the large drains at the bottom of the slope at the east end of his parking area. The sediment that had washed into the grate system was clogging the biofilters and compromising the effectiveness of their Filterra system. The in-grate filtration slowed to a near stop and caused the water runoff to flood back over the grate and into the yard.

Jim surmised that “if [they] were to change the biomedia every time it was plugged, it would be a weekly project.”  It was time to find an alternative solution. 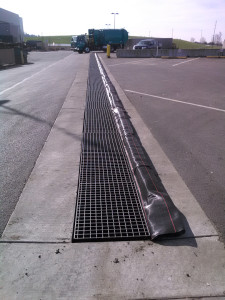 Nunn knew there had to be a way to solve this problem with his flooding Filterra system.  He checked over his Stormwater Pollution Prevention Plan (SWPPP) and started to research creative solutions. He was having no luck. Then he received a sample of a flexible sediment barrier called DuraWattle from one of his colleagues, Chris Ott, a Senior Environmental Specialist at the City of Tacoma. Jim was initially very impressed with the overall design with the DuraWattle. After researching more about the design and applications of the wattle on the website for, he decided it would be a fantastic fit for his drains.

The first benefit that caught Jim’s eye was the durability of the wattle and the fact that it was created to be driven over. This was clearly important as the location of the drains were at the entrance of the parking lot and the facility has approximately 60 trucks that drive over the drains several times a day, according to Nunn.

Additionally, as the DuraWattle is typically used as a perimeter control BMP, it is manufactured with a tail section to trench and backfill on soil or sidewalk applications to prevent undermining. This proved to be the final feature that enabled Jim to fit the wattle to his needs.

Nunn commented regarding the tail: “I then realized I could adapt it to my needs by installing it backwards with the tail anchored down by the grate, behind the wattle rather than buried in the dirt in front of the wattle”, says Jim. “This enables the sediment to be trapped before entering the trench.”

Jim contacted Heavyweight Sediment Control Solutions, manufacturer of the DuraWattle, and requested 300 feet to cover the 260 feet of trench drains he needed to protect. The DuraWattle was promptly delivered by truck to the facility, and soon after, the team at the City of Tacoma began to install the wattle.  According to Jim,

“installation was a non-issue as we pulled the grates, installed the tail, and reinstalled the grate anchoring the DuraWattle in place. The entire process took approximately two hours, mainly due to removing the sediment that had settled on top of the biomedia filter inside the trench.”

The tail section of the DuraWattle did not even require securing.  The weight of the drain grates was enough to hold the wattle in place, even when being driven over. 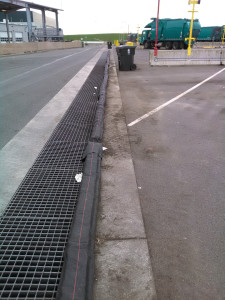 The first rains came shortly thereafter and the results were astounding. Jim saw a “significant reduction in the amount of silt being washed into trenches.” The DuraWattle had not only stopped sediment, but Nunn reported that the wattle “has stopped some of the larger debris such as paper, wrappers, and ear protection buds.” The product had indeed prevented the drain from getting clogged and overflowing.

Jim Nunn traded a weekly project of changing the biomedia for a short weekly maintenance around the grates.  “Weekly,” he stated, “we flip the wattle and use a sweeper attachment for our Bobcat to sweep the debris that has collected along the wattle.”

Today, three months after the initial install, Jim is still pleased with his choice in the DuraWattle. He commented that the best benefit of the decision has been the longevity of the product. “We see this as a solution to a problem that will be indefinite. We intend to use the DuraWattle for this application until it fails.”

When asked about the durability of the DuraWattle, Jim explained that the only issues with durability were in areas where drivers would back onto the wattle and turn their wheels on top of it, causing the wattle to rip in those places. However, as of the writing of this article, only two sections of wattle have had to be replaced.

When asked whether he would recommend the DuraWattle to others, Nunn replied,

“Yes, besides being able to order and receive quickly, it is easy to work with and I can see it would be advantageous to have available on worksites where you need to keep sediment out of the stormwater as we were able to adapt it to our needs here on our site. Very versatile!”