Jagoe Homes is a family-owned business that has been building homes and developing communities in Kentucky and Indiana for over 70 years. Jagoe Homes was named Professional Builders 2010 National Builder of the Year.

In the past, Jagoe would use silt fence as the main perimeter control device at their home sites under construction and developments under construction. However, in this application, silt fence was a struggle for Jagoe Homes and its in-house installation team. Silt fence near egress points on their home construction sites would often be destroyed when a truck delivered a load of materials. Additionally, silt fence would need to be replaced multiple times before the project was stabilized.

Jagoe also tried to use weighted synthetic sediment control barriers as an alternative to silt fence. However, these products proved very difficult to work with after a rain event. These products would become so heavy that Jagoe began to worry about the potential for back injuries if his team was moving the waterlogged and sediment-laden synthetic barriers.

Brad Jagoe first saw DuraWattle® at a residential development in Colorado. After thorough research, he decided to use the product as the main perimeter control device on the street facing side for homes under construction in several communities.  After initial success, Jagoe planned for DuraWattle to be installed for the life of their current development projects, from initial groundwork until final grading before sod was installed.

The product arrived compressed and was distributed to the different communities. The compressed bundles were easily loaded onto trucks and sent out for installation. According to Jagoe, the installation went much faster than other silt fence installations done in the past. Additionally, as DuraWattle is lightweight and designed not to retain water or sediment, the installation team had a much easier time distributing it than the other synthetic barriers.

Overall, Brad Jagoe has been very pleased with DuraWattle’s performance. As of November 2017, he has found success using the product on multiple developments and he plans to continue to use it for future projects. The 20000 plus feet of product has required very little replacement; only routine sediment removal has been required after rain events. Jagoe has replaced less 5% of the product due to damage and he has reused more than 80% of the DuraWattle from his original purchase in 2016. The product has lasted much longer than silt fence and takes less effort than other weighted synthetic products. Jagoe has reported major labor cost savings that he attributes to DuraWattle’s lightweight design, durability, and ease of installation. His team was able to install about 2000ft of DuraWattle a day. Brad Jagoe also appreciates that the streets of their developments are clean, and their future communities look respectable thanks to his innovative choice of sediment retention device.

Why did you choose DuraWattle? What were you hoping to get from it?

We were using silt fence, and occasionally we still do in places; but we were also using weighted sediment tubes and other products. With the weighted sediment tubes, they were good at the beginning, but they were tough to handle and maintain. They were tough on the backs of people having to move them. The longer they were in place, the heavier they got as they retain a lot of the sediment inside them.  We used those for probably three or four years.  After the first year we were looking for alternative solutions and eventually we saw the DuraWattle out in Colorado.

What problem were you trying to solve by using the DuraWattle?

The weighted sediment tubes were heavy, and it was very cumbersome to try and move them. Plus, the potential for back injury was increased.  We needed a product that would perform but not put undue stress on the people working with them.  With silt fence we had a hard time properly maintaining it and it would get destroyed on home construction sites because of material deliveries, utility companies, etc.

How many times did you typically replace your silt fence before you started using DuraWattle? Considering from land development stages to finishing the home site. 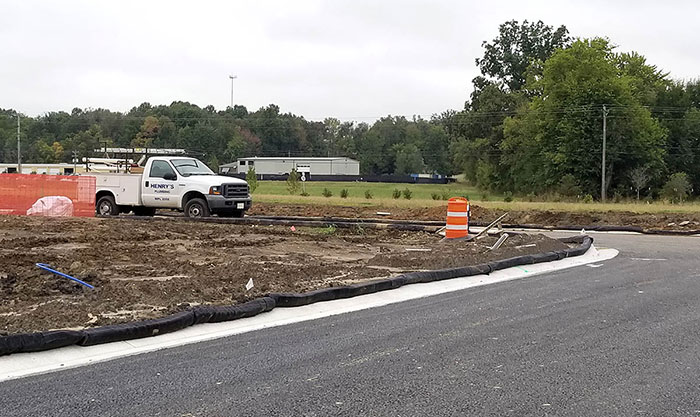 Do you know how many man hours it takes to install DuraWattle?

We can install approximately 2000 feet per day. For the most part the curbs are already in and it’s on top of the curb and they’re digging the little trench right behind it and it’s been very quick. Also with the low profile, they make the appearance of the community look better.

Regarding your installation technique, do you trench with picks and shovels or are you using heavy equipment?

We don’t use machines very often.  We install DuraWattle on the curb and then quickly backfill with shovels.

Did you experience any labor cost savings with the installation?

It is quicker to install than the silt fence and easier to deal with than the weighted sediment tubes. When we used the weighted sediment tubes there was a direct correlation between length of time to install and maintain and the amount of time the tube had been used.  The longer a tube had been used the heavier it was and that resulted in longer installation and maintenance times. Not only did productivity go down but the burden and stress on our people went up.  DuraWattle improved that considerably.

DuraWattle is shipped to your sites compressed. What is your impression of the compressed shipment? Is there any benefit?

That was one of our concerns, how we were going to deal with them when they were shipped. We don’t own forklifts or equipment usually needed to unload material and didn’t have space to store large quantities of material.  With them being compressed we could easily accommodate them and distribute them to our developments.

Do you have any idea the number of feet of DuraWattle that you’ve used so far? 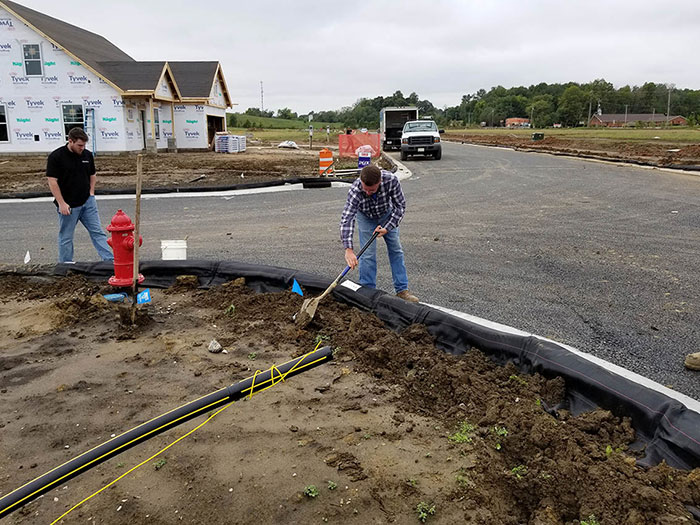 Would you say you have vehicles driving over the top of it every day?

Maybe not every day but frequently.

They do. For instance, if it’s a truss delivery company coming into a limited access site, then they were going to run over it whether it’s DuraWattle, weighted sediment tube, or silt fence. If they’re not able to make that turn and get something delivered and dropped within the construction drive, then they’re going to run over whatever the sediment control measure was. The DuraWattle provided a better scenario for that type of thing. Our Project Managers cannot be present every time someone delivers to a job site, so we needed something that would perform even if it was run over.  DuraWattle, because of how it reacts when you drive over it, is more durable and lasts longer than other products. It continues to perform and requires less maintenance and is more easily maintained if needed.

Have you seen anything negative from the increased site access? Does it create any problems? 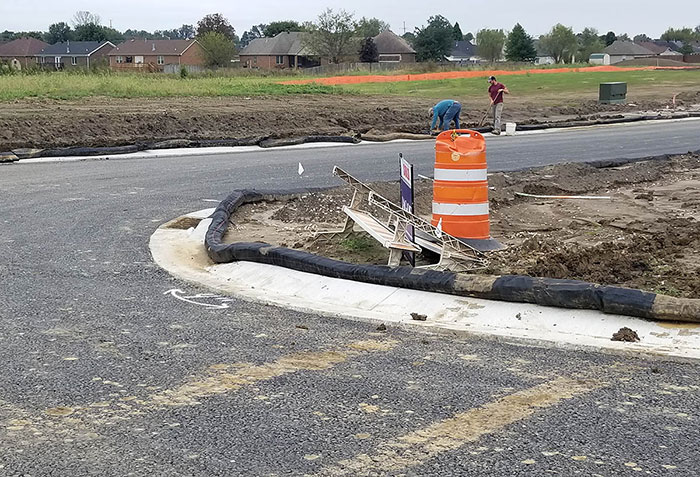 Can you describe your experience with removing the product at the end of your projects?

We leave our sediment controls in place until sod is installed.  DuraWattle is easier than any of the other products we have used.

How do you store the DuraWattle between jobs?

We store them in each community where the concrete wash-out is located or install them where our next house will be started.

So, you’re reusing a high percentage of the DuraWattle? 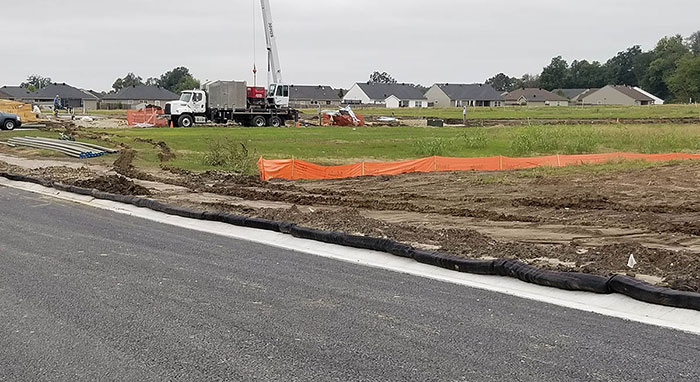 Do you normally use DuraWattle for complete perimeter control or just access points?

We install it along all streets.  Currently, we don’t use it along the rear or sides of sites.

So how would you describe the performance of DuraWattle and the durability of it?

I’ll compare it to the other two things we’ve used in the past. Compared to the silt fence, it lasts longer, doesn’t get torn up as quick, and it’s easier to repair if it needs to be. Compared to weighted sediment tubes, they might last as long as DuraWattle, but they were so hard to move and deal with that we would have a bigger issue with them. Also, when the weighted sediment tubes would get busted, then you’d have the contents of the tubes out in the street, and you couldn’t reuse them again. With the DuraWattle, somebody can drive over it, it compresses and returns to normal.  The durability is substantially longer with the DuraWattle.

Do you typically have to perform maintenance on the DuraWattle?

After significant rain events we have to perform routine maintenance on DuraWattle just like we would have to with any other product. The big difference is the decreased maintenance involved due to the durability and by having less damage than the other products we used to install.

From land development to finishing the home, what percentage of DuraWattle do think you replace due to damage?

Have you noticed a difference in the amount of sediment in the street when using DuraWattle?

It is better.  With less damage and less maintenance required, the result is less sediment.

What is your feedback from your inspectors?

We have a great relationship with our different inspectors.  They had never seen the product before but trusted our judgement and they have had no problem with it.  If DuraWattle didn’t perform they would have an issue (so would we), but that obviously has not been the case.

How has DuraWattle performed in significant rain events at your developments? Has it done a decent job?

During significant rain events they have performed better than silt fence and the same or better than other products.

Would you recommend this product to others in this industry and why?

It’s accomplishing the sediment control better than silt fence, the weighted sediment tubes, or straw wattles. DuraWattle has accomplished multiple goals for us – keeping sediment out of the streets and waterways, keeping installation and maintenance easy, and keeping our efforts cost effective.  And they look better than alternative products, therefore they contribute to helping the development look better.