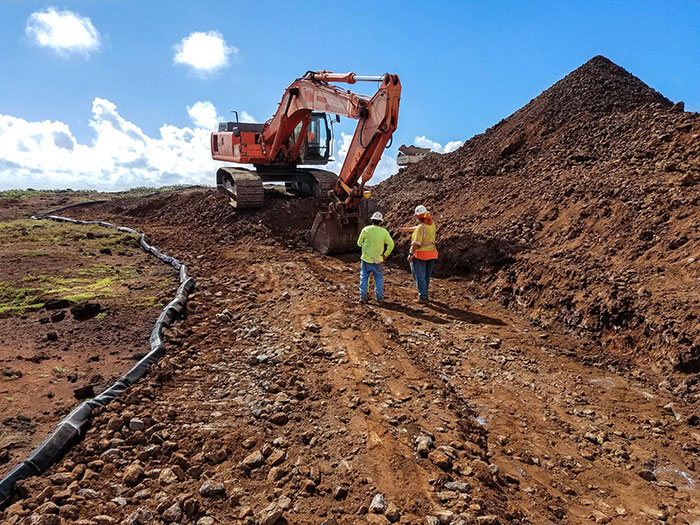 Earthworks Pacific, Inc. is a heavy civil and underground utility contractor based in Lihue, HI. Founded in 2003, they have a reputation of excellent work in both the public and private sectors throughout the Hawaiian Islands.

EPI was contracted to start work on the new Makahū‛ena Estates Subdivision in Poʻipū, on the island of Kaua’i, in October of 2016. The future neighborhood of custom homes was planned along the shoreline, with a beautiful view of the Pacific Ocean.

Alyssa Carveiro, Project Engineer, wrote the initial SWPPP for the project. Bryan Davidson, Project Manager and Superintendent at EPI, made modifications to the SWPPP based on field conditions. He then purchased and installed BMPs, and oversaw SWPPP inspection, along with Brandon Ezaki and Jordan Wilson, both Project Engineers with Earthworks Pacific, for the project until its completion in July of 2017. 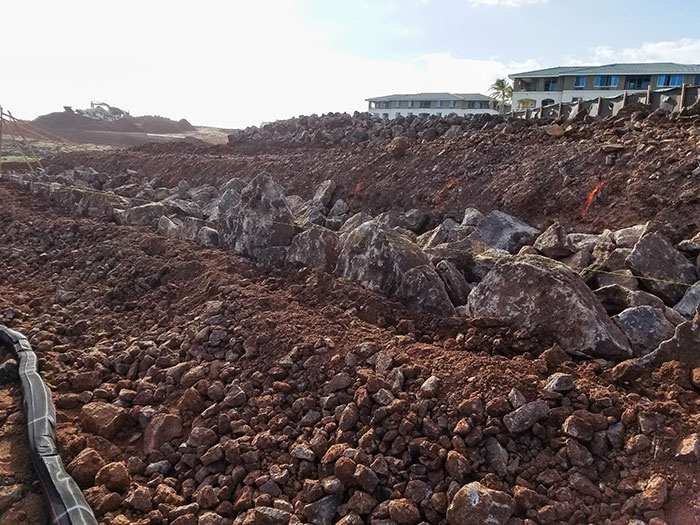 The Makahū‛ena Estates Subdivision was to be built on a pristine shoreline property, and the natural landscape needed to be preserved at all costs. The property had several different types of ground conditions that varied from silt to solid basalt rock. The BMP chosen for the project needed to be installed on these different ground surfaces while still providing a continuous barrier to keep sediment laden water trapped on site.

Earthworks Pacific did not want to use silt fence or similar trenched-in products for the project because installing silt fence on the solid basalt rock would have required special equipment and more labor hours for installation, and it would have caused irreparable damage to the existing ground along the shoreline.

The project drawings called for straw wattles or a silt fence alternative. However, if the alternative barrier chosen was trenched into the rock per the details, then the removal of the product would have undoubtedly permanently damaged the landscape. The project needed a BMP that could be installed on hard surfaces without damaging the ground surface when removed.

Additionally, substantial grouted rock walls up to 13’ tall were to be built less than 10ft from the perimeter of the project by their subcontractor, T. Masaniai Contractor. The perimeter control BMP would need to withstand traffic and heavy construction activity without compromising its overall sediment retention effectiveness. 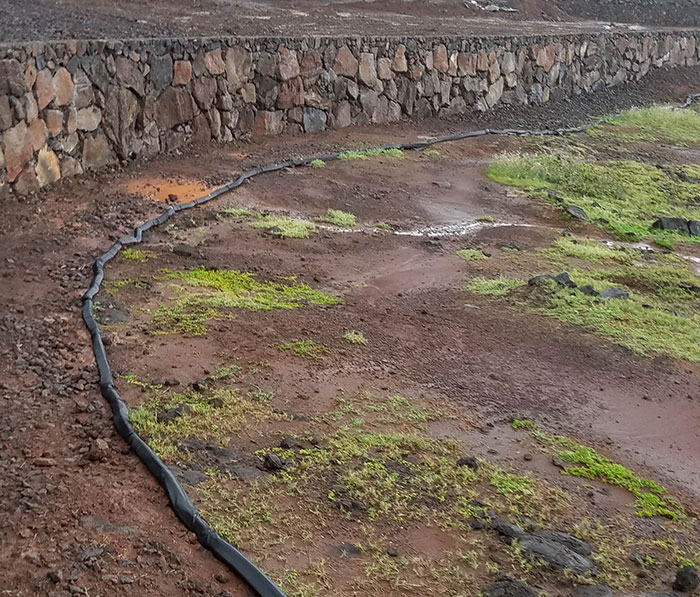 Davidson first heard about DuraWattle® in Erosion Control Magazine. After doing his own research, he purchased one pallet of the product from Exacta Sales in Honolulu, Hawaii.

According to his research, DuraWattle was the best alternative to silt fence that could provide a continuous sediment control barrier across multiple surface types. The product also solved the issue of a low impact installation; the recommended hard surface installation of DuraWattle would keep the basalt rock shoreline intact while keeping sediment trapped on site.

DuraWattle is also designed to be driven over by heavy traffic. Subcontractors would be driving excavators near the perimeter when constructing the grouted rock walls. The product would be able to bounce back and remain effective during heavy rain events even after being driven over by excavators. 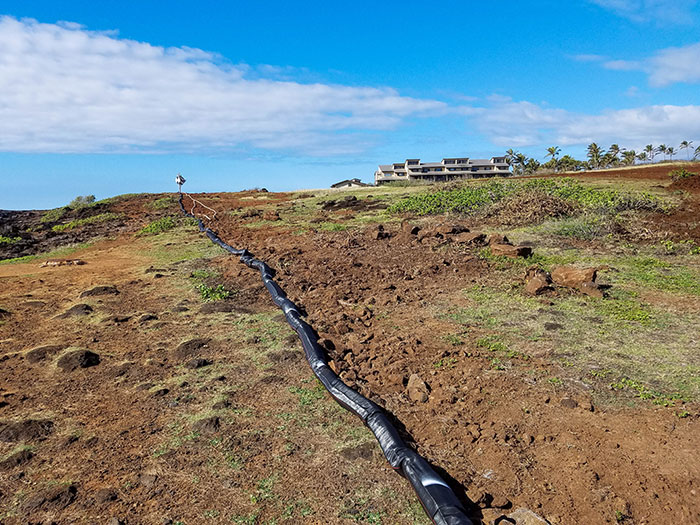 1800 feet of the product arrived compressed on one pallet at the site and the lightweight bundles were moved and distributed, by hand, around the job site.

According to Bryan Davidson, 1650 feet of the product was installed at the Makahū‛ena subdivision by a three-man team in 15 hours. He said installing DuraWattle on soil took longer than installing silt fence on soil; however, the overall installation cost less than if he had installed the BMPs that the plans originally specified. Davidson said:

“The DuraWattle was 60% cheaper than trenching into the solid rock (to install the silt fence alternative).”

The install team used the provided pins and washers to install the product on soil and powder-actuated fasteners with lath when installing on the solid basalt rock. Hard surface installation of DuraWattle usually has the product secured to the ground using wood planks or steel strips. However, the basalt rock was too uneven, and Davidson had to secure the fasteners directly into the tail section and “backfill” over the tail section with 3”- 6” gravel.

This project was being constructed during Kauai’s rainy season, and large rain events could be expected at any time. Augmenting the DuraWattle with gravel over the tail section was necessary to keep sediment on site. Without the tail section sealed securely to the ground, any heavy concentrated flow would have undermined the DuraWattle at the uneven sections of rock and caused a massive BMP failure, especially given the project’s proximity to the ocean. 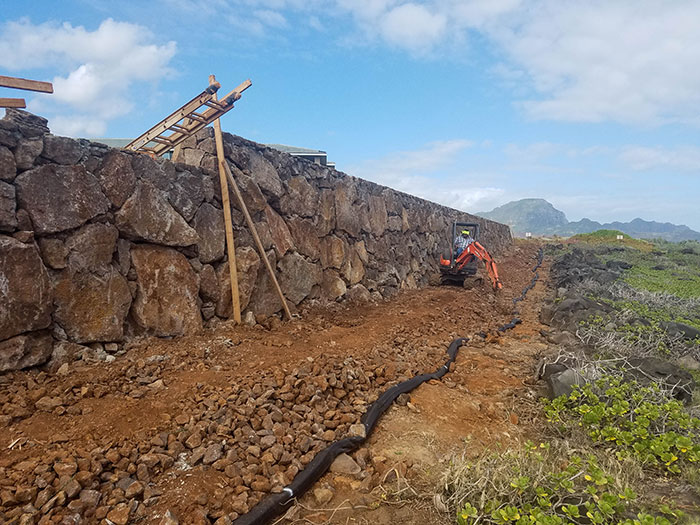 Two Rain Events with over 5 inches of rain each

The project experienced two large rain events in a nine-month period. Both events saw over 5 inches of rain in less than 24 hours. The heavy rain could have been catastrophic for the Earthworks Pacific’s team, as well as the adjacent Pacific Ocean, but their good housekeeping practices kept the site secure during both events.

The gravel helped to dissipate the stormwater flow enough to allow the DuraWattle’s high flow filter medium to retain sediment and create sheet flow off site. Davidson’s team needed to re-backfill the tail section in a few locations, and remove the built-up silt in other areas. However, Davidson was very impressed with the performance of the BMP combination.

Although the DuraWattle saw little traffic from heavy machinery, Davidson still had to replace a few 12’ sections of DuraWattle after they had been torn by large excavators that turned their steel tracks while on top of the product.

After the rock walls were installed and the site was stabilized, Jordan Wilson removed the product with little difficulty or damage to the product. The basalt rock and pristine shoreline were preserved and, according to Davidson:

“It was difficult to tell where DuraWattle had been installed after we finished removing it.”

Earthworks Pacific plans to reuse their DuraWattle on future sites. After removing the product, his team bundled the product with rope and stored it in a pile.

Despite heavy rain events and heavy construction activity near the perimeter of their site, Earthworks Pacific created an innovative combination of BMPs that worked. They kept the site in compliance while preserving the beautiful Hawaiian shoreline for both the future residents and the public to enjoy.